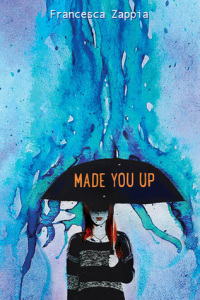 Synopsis*: Alex fights a daily battle to figure out the difference between reality and delusion. Armed with a take-no-prisoners attitude, her camera, a Magic 8-Ball, and her only ally (her little sister), Alex wages a war against her schizophrenia, determined to stay sane long enough to get into college. She’s pretty optimistic about her chances until classes begin, and she runs into Miles. Didn’t she imagine him? Before she knows it, Alex is making friends, going to parties, falling in love, and experiencing all the usual rites of passage for teenagers. But Alex is used to being crazy. She’s not prepared for normal.

☁️ Book Review // Girl Made of Stars – I Am Broken

Me at my Therapist: My paranoia is acting up again
My Therapist: Why?
Me: throws Made You Up on his desk
Me: Because of this fucking book
Therapist:
Me: I want to be buried with it

“Thank you,” the lobster said.
“You’re welcome,” I replied. I dropped it on the ground.

When I saw that it was Mental Health Awareness Month I wanted to make sure I read at least one book with mental health representation this month.

Made You Up is a book that has been on my TBR for years and I just haven’t gotten around to picking it up yet.

Well, that is, until I saw it at the library while I was looking for books on Hysteria. I was planning on reading something else but I realised this was the book I needed to read this month.

So why did I feel it was so important for me to read this book?

Sometimes I think people take reality for granted.
I mean like how you can tell the difference between a dream and real life. When you’re in the dream you may not know it, but as soon as you wake up, you know that your dream was a dream and whatever happened in it, good or bad, wasn’t real. Unless we’re in the Matrix, this world is real, and what you do in it is real, and that’s pretty much all you ever need to know.
People take that for granted.

I’m about to get hella personal, but honestly what’s new???

My great uncle had schizophrenia. I never got to meet him, in fact no one from my generation did, I’m not even sure if my mum and her siblings ever did?? He killed himself quite young and it left a gaping hole within the family.

So, I’ve basically been worried since I was teen that myself or my little brother might end up with it. The fear is real, and I think it was worse the less I knew about it.

This isn’t my only experience with the illness. My aunt married a man who’s schizophrenic, though I never really saw him all that much. My mum has been a church counselor to several people with schizophrenia, with one of them staying with us for a brief period of time.

It’s a thing I have had probably more experience with than most but was still something I never 100% understood.

I don’t know why I felt now was finally the time to face this fear, but I’ve been doing a lot of facing things I’ve not felt ready for recently and so why not this too?

Was that Blue Eyes?
I grabbed the Magic 8 Ball and rubbed the scuff mark as I looked down into its round window.
Better not tell you now.
Evasive little bitch.

Made You Up follows Alex, a paranoid schizophrenic teen, at her new school. Armed with her camera and perimeter checks, she’s trying her best to determine whether the things she’s seeing are real or not. But as she makes friends, and enemies, it’s becoming harder and harder for Alex to tell.

Especially when she thinks she might have found the smart, blue-eyed boy from her childhood, the same boy she had convinced herself was part of a hallucination involving a yoo-hoo and lobster tank.

Now, Alex can’t be sure if anything from her past, or present is real but maybe she’s found someone who she can trust to tell her.

“He knew who Acamapichtli was,” I added after a second. “Along with most of the other Aztec emperors. And the Tlatocan.”
Dad’s approving noise rose an octave.
“And I’m pretty sure he can speak German.”
Dad smiled. “That all?”
My face heated up again at the look he gave me. As if I liked Miles. As if I wanted to think about him.
Just thinking about his stupid face and his stupidly blue eyes turned me into the most confused person on the planet.
“No,” I said, burrowing into my blanket. “He can also take a hit.”

I loved like all of the characters in this book.

I love Alex, she was so real for me, through the entire book and her fears are a lot of the same ones I have myself. She’s whip smart and she’s not afraid to stand up for herself, even when it feels like the whole world is against her. I’ve never identified with a character when it came to my paranoia, and I will forever be grateful to Zappia for that.

And Miles. My sharp edged, intelligent and emotional, Miles. I love him. I don’t care that everyone thinks he’s a dick because I love him and I get it. I get struggling to understand people’s emotions and how that can make you cold and callous. That it can make people think you feel no emotion at all. Being forced to be an adult far sooner than any kid ever should. I would, quite frankly, protect Miles with my life.

The more she talked, the more I realized that June knew history. Not the history my parents were having an affair with, but personal histories. She learned the events that made up a person’s life, and she used them to understand why they did the things they did. Miles knew words. She knew people.

What most surprised me was how the mean girl trope was handled. As soon as I get a sniff of a mean girl in a book, I want to throw it at a wall. I’m over it, it’s tired and dangerous and sexist and I hate it. But!!! Zappia actually gave this trope the nuance and complexity it deserves.

There are so many things to love in this book. There’s found family, and fantastic neurodiverse rep. And there isn’t a love cures all bullshit ending, there isn’t even an “I’m going to come off my meds even though it’s a terrible idea” plot device. There were so many twist and turns, my head was spinning. Plus there’s loads of fun hi-jinks and a python! Guys, there’s a fucking python.

Made You Up is so engaging and captivating, and all the other synonyms for a book I. DID. NOT. WANT. TO. PUT. DOWN. I haven’t been pulled into a book this deep and quickly in ages!

I laughed when I remembered Tucker bringing up the bridge earlier. The Red Witch? The one who gutted travelers, coated herself in their blood, and screamed like a banshee? No, I wasn’t scared of her. The nighttime might have made everything upside down, inside out, scary as hell, but not to me.
The baseball bat clink-clink-clinked as I walked toward Red Witch Bridge.
I was the scariest thing out here tonight.

I was right, in thinking that this was the book for me to read this month because it was brilliant and educational! I came away knowing more than I did going in.

I laughed and cried and realised how much I identified with Alex. Not the hallucinations part of schizophrenia, but her paranoia. God did I feel it in my soul.

I do suffer from paranoia thanks to PTSD. So I get it. Most of my paranoia surrounds relationships and other people, and when it’s at it’s worse, myself. I can tell when it’s getting bad, and I’ll actively try and make sure it doesn’t affect my decisions but it’s hard to tell what is intuition and what’s just plain paranoia.

My paranoia turns on other people, it turns on my memories, it turns on myself. I second guess everything, my choices, my feelings, my thoughts. There’s a reason I’m so indecisive.

I don’t know if I can ever capture the feelings well. For all the words I have at my disposal, it’s hard to find the ones that fit, in this instance.

And I’ve not really found anything that captures it for me. But this book? This book did it for me. It wasn’t in beautiful prose, like I had expected. No it was more real than that. It was in Alex’s actions. It was in her doubts. It was in the slow build of her feelings and thoughts. This book held my hand and showed me I wasn’t alone.

Tears filled my mother’s eyes. “You have no right to come in my house and tell me how to treat my daughter!”
“Oh, really? Because I know terrible parents, and you’re one of them!”

The only small complaint I have is that the ending just kind of . . . fell off.

There was all this fantastic build up and full speed momentum and then once that was gone, the book ran out of steam.

I don’t know, it’s a fine ending, it’s just not quite what I would have chosen. But I mean, after everything else this book gave me, I find it hard to be disappointed.

Will I Ever Read A Better Mental Illness Rep Book Again?
Probably Not.

Have you read Made You Up?
What did you think of it?