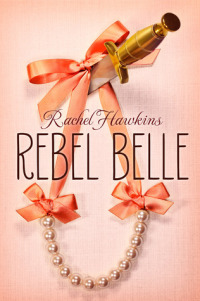 Synopsis*: Harper Price, peerless Southern belle, was born ready for a Homecoming tiara. But after a strange run-in at the dance imbues her with incredible abilities, Harper’s destiny takes a turn for the seriously weird. She becomes a Paladin, one of an ancient line of guardians with agility, super strength and lethal fighting instincts.
Just when life can’t get any more disastrously crazy, Harper finds out who she’s charged to protect: David Stark, school reporter, subject of a mysterious prophecy and possibly Harper’s least favorite person. But things get complicated when Harper starts falling for him—and discovers that David’s own fate could very well be to destroy Earth.
With snappy banter, cotillion dresses, non-stop action and a touch of magic, this new young adult series from bestseller Rachel Hawkins is going to make y’all beg for more.

I actually read and reviewed Rebel Belle at the start of this year, before I started up this blog but since I just finished the second two books in the series and will be posting Mini-Reviews of those on Monday, I thought it would be a good idea to post this one beforehand.

I’m currently in the middle of a whole bunch of series so this will probably become something I do quite often for books I have already written reviews for over on Goodreads.

“You’re our new Paladin,” she said, and despite all the awfulness of what had just happened, relief so intense it nearly took my breath washed over me. After all this time waiting for my Professor X, it was Saylor Stark. We were going to be fine.
“Well.” Saylor rose to her feet. “We are totally effed.”

I picked this book up because I follow Hawkins’ Twitter hashtag #sexyhistory, which I also usually read out to my mum as well. She has this way of making even something that could be incredibly boring, fun and exciting.

I don’t regret stumbling across her twitter, therefore leading me to Rebel Belles, I only wish it had happened sooner!

Rebel Belle is the story of Harper Price, a southern belle in all her glory.

The story starts with Harper trying to step out of her older sisters dark shadow and be the most perfect she can be, from the homecoming dance, right down to her lip-gloss.

But then the school janitor kisses her, transferring his Paladin powers onto her and her history teacher tries to kill her because of it.

Harper has to come to terms with not only her new abilities, and in turn her new destiny but also that her new destiny includes protecting David Stark with her life, the bane of her existence.

Rebel Belle was honestly so much fun. It’s such a simple, light-hearted book that it’s hard not to fall in love with it and all its characters.

Harper is the very opposite of what is considered a badass heroine. She’s particular and feminine as fuck and yet by the end of the book she’ll kick your ass whilst wearing a beautiful cotillion dress.

She’s everything we’re told isn’t badass because she’s not masculine and let me tell you, feminine can maybe be even more badass. More of this, please!

I’m sure there are loads more that I could say in reviewing this book, and I could get into the thorough breakdown of the whole thing but Rebel Belles was so fucking enjoyable that I don’t want to.

I don’t want to pick it apart because there is no need to. There’s not a whole heavy underlining meaning to the story, it doesn’t feel like Hawkins is trying to impart some kind of insightful wisdom onto her readers, it’s just a fun read and I don’t want to take away from that by pulling the story apart.

So if you want a fun, light read, then please do go ahead and pick this up. I know I’ll be checking out the next in the series soon.

“But I’m going to do it my way.”
Saylor’s brows drew together. “What does that mean?”
“It means we’re in trouble,” David said, but when he looked at me, he was smiling.